Many Rowers often look towards the gym to give them the edge over rivals. Although resistance training alone wont make a champion rower but when used correctly it will improve your performance  and decrease your chance of injury. While training competitive rowers I found a number of specific resistance exercises very useful.

Rowing stands alone from other sports in a number of unique ways. The high demands placed on the muscular system by recruiting nearly every muscle in the body in a repetitive action while using dynamic and static components throughout the stroke. Unlike most other sports that require bipedal locomotion (Running and swimming), Rowing uses both the lower and upper limbs to produce force in the same action at the same time. Therefore rowing has some specific needs from a well-designed  resistance programme.

In my opinion and experience the most important factor for improvement at any sport is to practise the sport. Most of your training should be on the water; resistance training should range from a minimum of two weekly sessions with a maximum of four or five sessions depending on your competition level and how much time you can put into training.

Over the last 15 years training competitive rowers from club to international level I have made some changes to existing exercises and found some specific techniques .The exercises below are a small selection and not the only exercises I would recommend, they are not to be used as a standalone programme. I take each athlete as an individual case and design a specific periodised programme depending on their abilities, weaknesses and goals.

Before commencing any of these exercises seek clearance from a medical practitioner.

The squat is one of the prime exercise patterns for rowing.  From the catch phase the drive is initiated by the rectus femoris (One of the Quads) The hamstrings and gluteus maximus work as pelvic stabilises during the drive. The start of the drive phase is where the greatest increase in power output is seen during stoke. Both squats and the drive phase activate similar muscles.

Back Squat vs Front Squat.

This can be due to the repetitive natural of the sport creating muscular imbalances. Because Rowing uses the same muscle groups during the rowing stroke a number of changes to posture can be seen. I will focus on just two for this article, forward hip tilt and lower back lordosis ( Tight lower parapinals, tight hip flexor and weak hamstrings). With some of the rowers I have trained there has been an imbalance between the lower paraspinals (Lower back muscles on the sides of the spine) and the gluteals. With an increase in strength of a muscle group you often see a shortening of that group. When the lower paraspinals become stronger and shorter they can contribute towards lordosis (excessive inward curvature of the lower spine).

During the back squat loading though the lumber vertebra is huge. Lumber lordosis changes the loading away from the body of the vertebra toward the spinal cord. It can also results in a difference in the thickness between the front and back parts of the intervertebral disc (wedge affect). The front squat has a more upright trunk position during the lift. This can decrease the curve from lordosis and improve the loading on the lower spine. 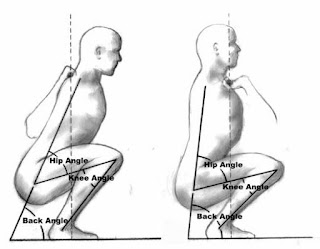 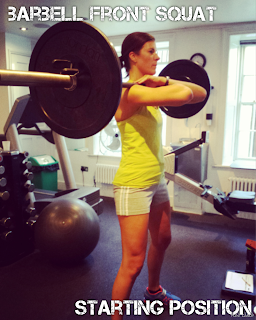 Feet should be between hip and shoulder width apart, toes forward and slightly outward. Keep elbows high, eyes on the horizon and the chest up. Move with hips first then knees. Squat as if sitting into a chair, keeping the abdominals strong.  Breathe in as you descend. 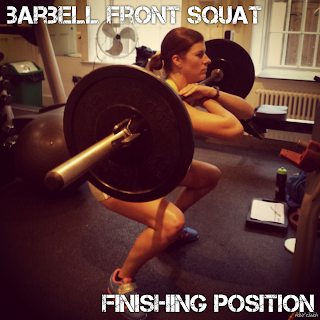 Stop decent if the heels start to rise or the pelvis tilts backward. How deep you go depends on your flexibility, lifting experience and form.   Then drive up to starting position, keep chest up and eyes above horizon. Breathe out as you rise up using a valsalva maneuver. (Don’t hold your breath during all exercises). Repeat depending on rep range.

Often an Olympic style exercise is used during a power phase of the resistance programme for competitive rowers. In most cases it will be the power clean. Great exercise but it has some limitations when used by rowers. For a start if you are using an Olympic bar on the ground the starting position is quite high. Therefore it will produce a limited flexion of the legs and torso. Flexion of these joints is greatest during the start of catch phase.

The greatest need for power production is in the earliest stages of the rowing stroke.  (As you can see in t graph 1). The trouble with using power cleans on the ground is you miss the early position with the greatest flexion in the lower body 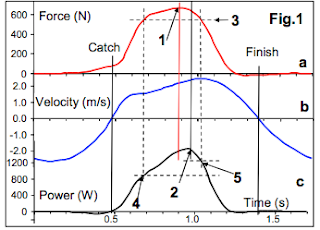 I introduced a stable box so the deep catch position can be copied by the starting position of an Olympic lift. Using a box will place a greater demand on flexibility so you might have to work on the depth and start with a lighter load. I also prefer the high pull Olympic lift over a power clean because in the power clean the catch of the bar has little use to a rower. You can use an Olympic bar or dumbbell for high pulls. In this case I went with dumbbells because they increase the demands on stability during the exercise. 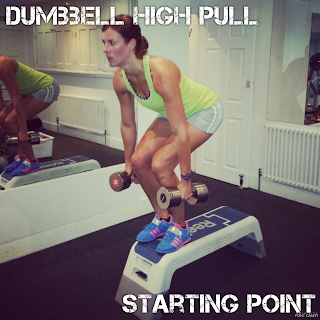 Stand on a stable box or step. Feet should be a similar spacing as in the rowing position, toes forward and slightly outward. Standing with back rigid and flat or slightly arched. Eyes on horizon. Simultaneously fully extend the lower extremity joints and quickly shrug shoulders. Pull arms as high as possible. Aim for the armpits with the dumbbells. 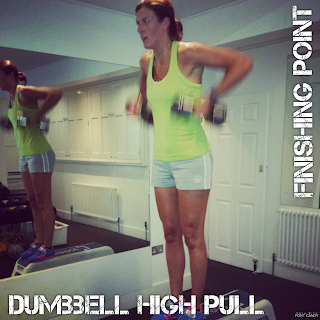 After the lower body has fully extended and the dumbbells reached near maximal height, control the dumbbells back down to starting position and repeat depending on rep range.

Towards of the end of the drive phase the rower engages scapular adduction and elbow extension.  There are several row style exercises you can do in the gym to activate the same muscle group involved in the phase. I see the prone row used in a lot of rowing programmes it has its limitations. Preforming the exercise on a bench decreases the range of motion and cuts out the most important part of the exercise.  The last 20% of the range of motion (ROM) should focus on scapular adduction.  I prefer to use bent over dumbbell row because you a get a greater ROM and you also get an integration between the legs, core and shoulder complex. 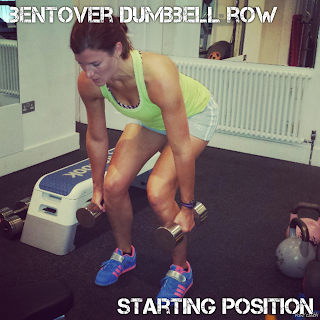 Start with feet shoulder with apart. Hold the dumbbells with a neutral grip shoulder width apart. Bend at the hips while keeping the back and neck in a neutral position. Hold dumbbells just above knees. Pull Dumbbells up toward stomach while keeping your elbows close to your sides. Draw shoulder blades together at the top of the exercise.

The seated cable row is another great common exercise in a rowing programme. The seated cable row is a similar exercise to the bent over dumbbell row with a focus on the later phase of the drive.  I started using double cable seated row with rowers to be even more specific to a sculling technique. With the individual cables you can mimic the part of the phase before you start with recovery. Another change to the traditional technique of a seated row I use is a reach forward like the catch phase and back extension as you pull the cables back. Again you are integrating the different muscle groups together similar to the rowing stroke. 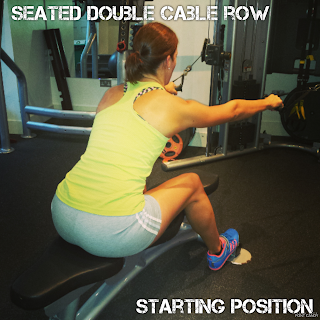 Sit with a slight bend in your knees. Reach forward with two D handles to the starting position similar to the catch position of a rowing stroke. 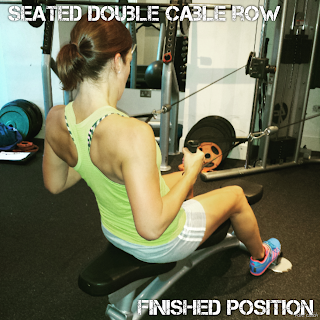 Pull Cables toward stomach while keeping your elbows close to your sides. Draw shoulder blades together at the top of the exercise. Then with control return to the starting position.

The two contact points for force production of the rowing stroke are the feet and the hands. The bum doesn't count because the seat moves. The middle of these two points is the core (torso). Newton's Third Law, For every action, there is an equal and opposite reaction. You push with your legs and pull with your arms. With rowing, force travels from the legs into the boat and from your upper body into the oars which drive the boat forward in the water.  Your body’s ability to transfer this force as economically as possible will increase the amount of force you can apply and give you speed on the water. A strong core (torso) is essential for this process.

The swissball rollout is a great core exercise producing high demands on core strength and stability. I like the way it integrates the hip and shoulder complexes into the exercise. 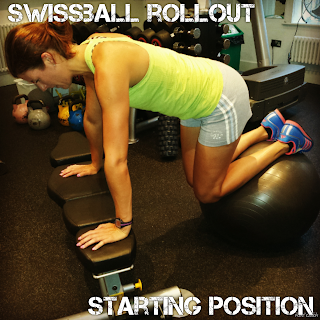 Knee on a swissball in front of a bench.  Keep back and neck in a neutral position throughout the exercise. Start with knees bent and hands or elbows on the bench depending on your experience with this type of training.

Roll the swissball out with you knees while keeping your neck and spine in neutral position. Limit the range of motion when you start. Increase the distance you roll the ball as you become more confident with the exercise. Swissball rollouts are demanding, if you feel pain in the lower back limit the range. Slow return to the starting position. 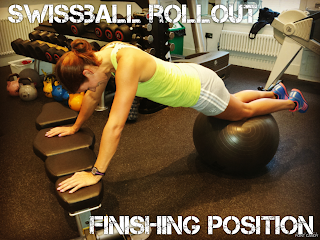 I have been established for over 25 years as a qualified one on one Personal Trainer. Now operating throughout Clifton, Redlands and Flax Bourton,Nailsea, Bristol.

I offer a friendly and results driven approach to your fitness and training goals, and I always ensure that all of my work is carried out with the up most professionalism. My aim is to help as many people as possible to achieve their goals from beginner to elite sports person, and I pride myself on keeping my customers happy and delivering their personal training requirements.